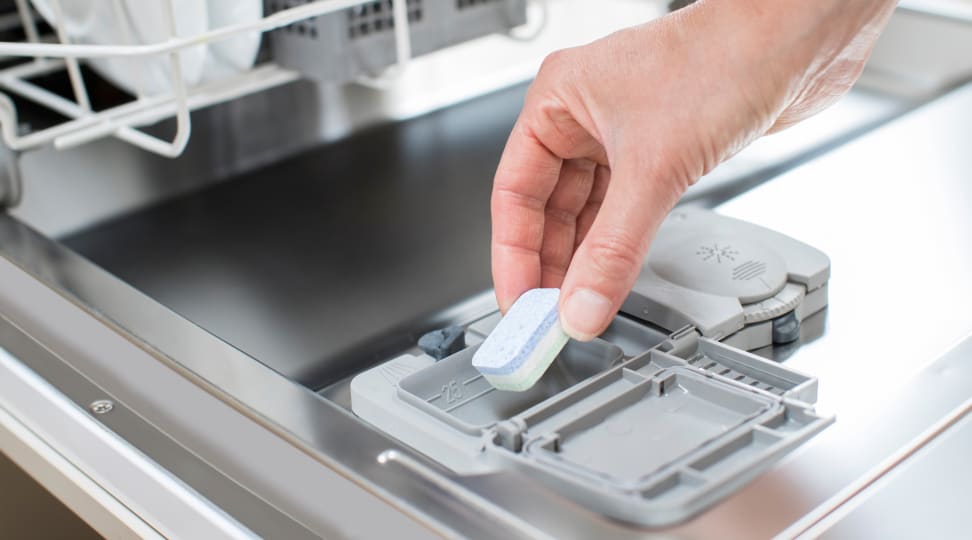 The detergent designed for use in dishwashers mixes more easily with soap than the liquid used for hand washing dishes. Thus, the water that enters the dishwashing machine manages to do a good job of cleaning the items on its racks.

A second reason for using the detergent in a box, rather than the liquid used for cleaning the glassware and plates

Dishwashing soap creates lots of suds. Picture the formation of suds in a closed space, like the basin in a dishwasher. Creation of all those suds would be a problem. Furthermore, the sudsy mixture of soap and water would leave a residue on the dishes, even after each of them had undergone a good rinsing.

If a homemaker ran out of dishwashing soap, would it make sense to use the boxed detergent that works so well in the dishwasher?

No, you should not substitute one for the other. The absence of suds would push the homemaker to use lots of the detergent, more than necessary. By using an excess amount of that powdery soap (detergent), the homemaker would lower the chances that each washed item could get rinsed thoroughly. In the absence of a decent rinsing, those washed items would carry a heavy residue.

What happens if you run a dishwasher after adding dishwashing liquid to the appliance’s soap dispenser?

That would cause a residue of soap to form on the sides of the dishwasher’s basin. This can contaminate the dishes and corrode the basin side over a period.

Is there a way to remove that residue on the walls of the basin?

Yes, there is a procedure for completing that type of residue-removal operation. First get rid of any suds and water. Wash out the soap dispenser. Dry the basin’s wet sides with a towel. Then put ½ cup of white vinegar in the cleaned dispenser; next cover the bottom of the basin with salt.

After you have done all that, then you can run the dishwasher. You may want to open the window, in order to get rid of the odor. Do not let the odor upset you; the odor will go away, and the unwanted residue should be gone forever. It should not return, unless you try one more time to use dishwashing soap in your dishwasher’s dispenser. It is best to call in the appliance repair experts in San Diego County when there is any issue.