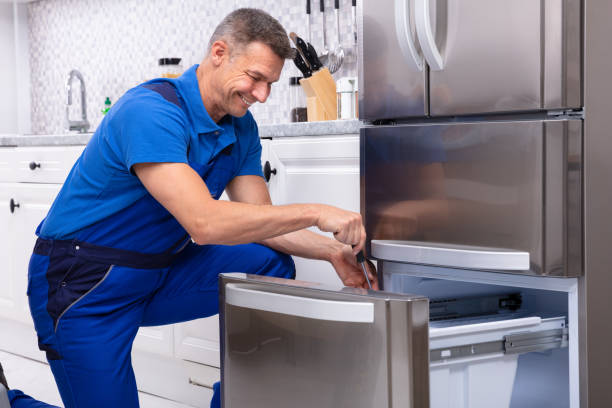 The compressor motor has failed
It does not switch on at all or it switches on and shuts off at once. The main causes of compressor breakage in Samsung refrigerators with No Frost defrost system:

– Operating and/or starting winding breakage – in this case, the refrigerator does not turn on at all;
– Inter-turn short circuit in the working or starting winding – motor starts for several seconds, the starting protection relay clicks and the compressor switches off;
-Winding short circuit to frame – in this situation, if you try to start the compressor, the circuit breaker will blow out.

The compressor cannot be repaired and is replaced with a new one.

– You need to identify the burned-out elements and replace them with new ones, and solder the suspicious tracks and/or contacts of the chip. – If the firmware fails, the module memory is unsoldered, reprogrammed and re-soldered. In complicated cases, when the chip’s processor fails, the whole control module is replaced.

The drain in the freezer of the refrigerator with No Frost is clogged
During regular operation of No Frost defrost in the Samsung fridge water is formed, which drains into the drainage channel at the back of the fridge. When the drainage channel is clogged or frozen, the water does not pass into the tub but flows to the bottom of the freezing chamber and freezes there.

It is necessary to remove the panel inside the freezer, behind which there is a No Frost evaporator and drainage hole, and flush the clog with a squirt gun. If this method did not help, the drainage duct should be cleaned with a cable.

The fan in the Samsung fridge with No Frost is broken
The fan drives the cold air from the No Frost evaporator in the freezer into the refrigerator compartment. If it fails, the fridge compartment doesn’t cool, but the freezer works. Basically, the fan motor burns, or the blades break.

Often the cause of fan failure is a malfunction of the Know Frost defrost system. Because of its failure, ice frozen on the evaporator blocks the rotation of the fan and puts it out of operation. Before the fan fails, you can hear the rattle of the fan blades engaging the ice.

A fan will not be repaired but replaced completely.

Usually, the damper motor fails. It comes in the body with the shutter, so it is not sold separately. Requires replacement of the entire damper.

Freon leakage
In Samsung No Frost refrigerators, a leak occurs:

Leakage is accompanied by the constant operation of the refrigerator motor and elevated temperatures in the freezer and refrigerator compartments.

If the leak occurred in the pipe joints, the technician renews it by soldering or locking technology. If there is a leak in the perimeter heating circuit of the freezer, it is cut off, the pipes are connected directly, and the refrigerator works without a heating circuit.

Whatever the problem with your Samsung Zero Frost dual-compartment refrigerator, we’re here to help. We will arrive within 24 hours of your call. We repair at home in the presence of the client.